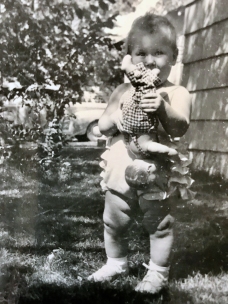 One of the family legends about me is that around the same time this photo was taken, I pulled myself up to a mirror and, as I stared into the eyes of that image staring back at me, I said, “Pretty baby.” Some people might think that was rather a conceited thing to say, but please remember that I was only about 18 months old at the time. Instead, I would say that I had a mother who adored me and made that statement to me enough that I began to say it before I even knew what it meant.

Later in my young life, my Mom told me I was “pleasingly plump,” a euphemism for the fact that I was quite sedentary during my childhood.  That meant I never got not enough exercise to cover the calories I was consuming.

I remained “pleasingly plump” throughout high school to the point that some well-meaning friends told me if I could just lose some of the pleasant plumpness, I would have lots more dates. I did manage to lose it at one point, but not by dieting. Falling in love for the first time works much better. After our first kiss, I promptly lost fifteen pounds. That svelte figure continued for about six months until I had my heart broken for the first time. The fifteen pounds returned and brought along some friends.

All that gaining and losing weight made me completely unrealistic about what I really looked like. I have always felt that I have the opposite of anorexia. An anorexic person that may be nothing but a skeleton in reality looks in the mirror and sees a fat person. I, on the other hand, look in the mirror and see the same person whether I am a size 6 or size 14. I can’t tell the difference. As a matter of fact I’m always a little taken aback when I start having trouble getting my jeans zipped up and I usually start ranting and raving , “Why can’t they make clothes that don’t shrink!”

I took a class once that suggested I stand naked in front of a mirror, study the image, and then look myself in the eye and say, “I love you just the way you are.” Great idea, right? I tried it. When I finally stopped giggling like a schoolgirl (I am a bit modest, even when it’s just me standing there naked), I paused and said, “Maybe next time.”

I have always assessed myself as being not quite good enough whether it’s my body shape, writing, housecleaning, dancing – it doesn’t matter, it’s just never quite right. That explains how in a journal I kept in my 30’s, I had a meltdown over my body measurements. I was keeping close track of them at the time, because I was on one of my diets and had joined a gym. Striving for that perfect 36-24-36 shape, I was lifting weights and running. None-the-less that perfect hourglass figure eluded me. I went on and on for an entire page in my journal about my “not good enough” measurements. What were they? 36-28-38. I stared at the page, and I almost cried. You see I was reading this entry some ten years later, in my late 40s when I would have given my first born to have those “imperfect” measurements.  There in lies an interesting phenomenon about me. I am so wise and I learn so well in retrospect. Only then can I see the folly of my ways.

I am now nearing the beginning of my 7th decade of life and I like to think I have gained a modicum of wisdom over time. I have vowed to stop using the rearview mirror approach in assessing my body image.  Instead, I am taking the advice of a very wise woman, Dr. Clarissa Pinkola Estés, author of Women Who Run With The Wolves…”. She suggests that we study the bodies of our female ancestors and learn to honor the things we share with them; large breasts or massive hips, long legs or big hands. Whatever we observe should be observed with reverence. After all, they are our ancestors.

Now when I look in the mirror at my prominent clavicles, or my short waist, or what one doctor called my “childbearing hips,” I see my grandma, and instead of giggling and turning away in shame, I say, “I love you, Grandma.”

Jo Virden is the author of A Passion For Life: Ruth Marie Colville. Her first love is writing short stories. My Darling Dorothy, which began as a simple short story, evolved into her first novel.

Although Jo’s profession was nursing, she has been writing short stories since high school. She has written and published both a biography and a novel while, ironically, none of her short stories have yet been published. She says, “It’s funny how life works. If you stay open to possibilities all sorts of opportunities arise.” One of those opportunities has developed into a passion promoting childhood literacy. She spends many hours volunteering in reading programs throughout the Denver Metro area. “I don’t know where this will lead, but I know I am helping to create successful adults who will enjoy reading. You could also say I’m creating future audiences for my books! Everyone wins!”

Jo Ann lives in Arvada, Colorado with her husband, Bill and enjoys outdoor photography, long walks in the Rocky Mountains, and spending time with her family.