The Guided Autobiography theme this past week was all about the role money has played in our lives. I struggled with what to write since I have a long and complicated relationship with money. I found those messy issues much too painful to put down on paper, at least on paper that other people would read. For now, those thoughts will remain safely tucked away in my journals.  Instead, I decided to write about where I might have learned to be such a “penny-pincher,” and how the lessons learned were, perhaps, not all bad.

Here is my story:

Pondering what I learned about money from the way I was raised, I guess I would say that I learned to be frugal, some would say “penny-pinching.” I also learned that there’s more than one way to meet the needs of a family, even if money is scarce.

My parents never shared their money concerns with their children. They didn’t have to.  We learned how to be frugal through mirroring them. My Mom used to tell me I could pinch more out of a penny than anyone she knew. I disagree. She needn’t have looked any further than the bathroom mirror to find someone who could match my thrifty nature.

One of Mom’s favorite sayings when she bought a new dress was, “Don’t tell your Dad.”  She had a way of pilfering grocery money, putting it in a savings account and waiting for a sale. Then, she would buy the dress, bring it home and put it in the closet as though it had always been there.  I’m sure she did something similar to cover the cost of buying new school clothes for four children.

We always had food, because Mom and Dad usually had a garden. If we didn’t have a garden, Mom would buy green beans or corn or beets by the bushel from someone who did. She would buy mountains of green beans and can them every fall, along with pickled beets and corn and tomatoes and sweet pickles. We didn’t have a freezer, but the local grocer, Warren, had lockers for rent in his store freezer. Our locker overflowed with frozen corn and ground beef, and chicken; lots and lots of chicken.

On Saturdays she made ham hocks and beans, one of my favorite meals to this day. The meaty aroma of those ham hocks and navy beans simmering in the pot all day long made them taste even better when suppertime finally arrived.

I didn’t know until I left home that some people actually have pancakes for breakfast. We had them for supper at least once a week, along with eggs and bacon. It never occurred to me that feeding a family of six ham hocks and beans or pancakes was a prudent way to stretch a dollar. I only knew how heavenly delicious those meals were.

Dad had his way of bringing in extra cash as well. He loved cars and he bought and sold them for as long as I can remember as a side business to running his gas station. He also came home on occasion with unexpected treasures by allowing people to pay their bills through bartering. That’s how I got my piano. It just showed up one night as payment for tires a farmer bought and couldn’t pay for. I also got a watch through that same system.

I never thought of us as being poor until Mom announced one day while doing the taxes that, according to the United States government, our yearly gross income fell below the poverty line. At the age of ten, I wasn’t sure what to do with that information. I was strangely proud that we were considered poor, and I told everyone at school that that was the case. Of course, none of them were impressed. They were farm kids, many of them poorer that we ever were.

It’s true that I grew up poor, and I learned well the lessons in being frugal. I will even admit to once in a great while using the phrase, “Don’t tell your Dad.”  However, the ham hocks and beans that I occasionally make and the pancake suppers I serve have little to do with pinching pennies. Instead, they are delicious reminders of growing up with a full belly, new clothes at the beginning of every school year, and a piano. 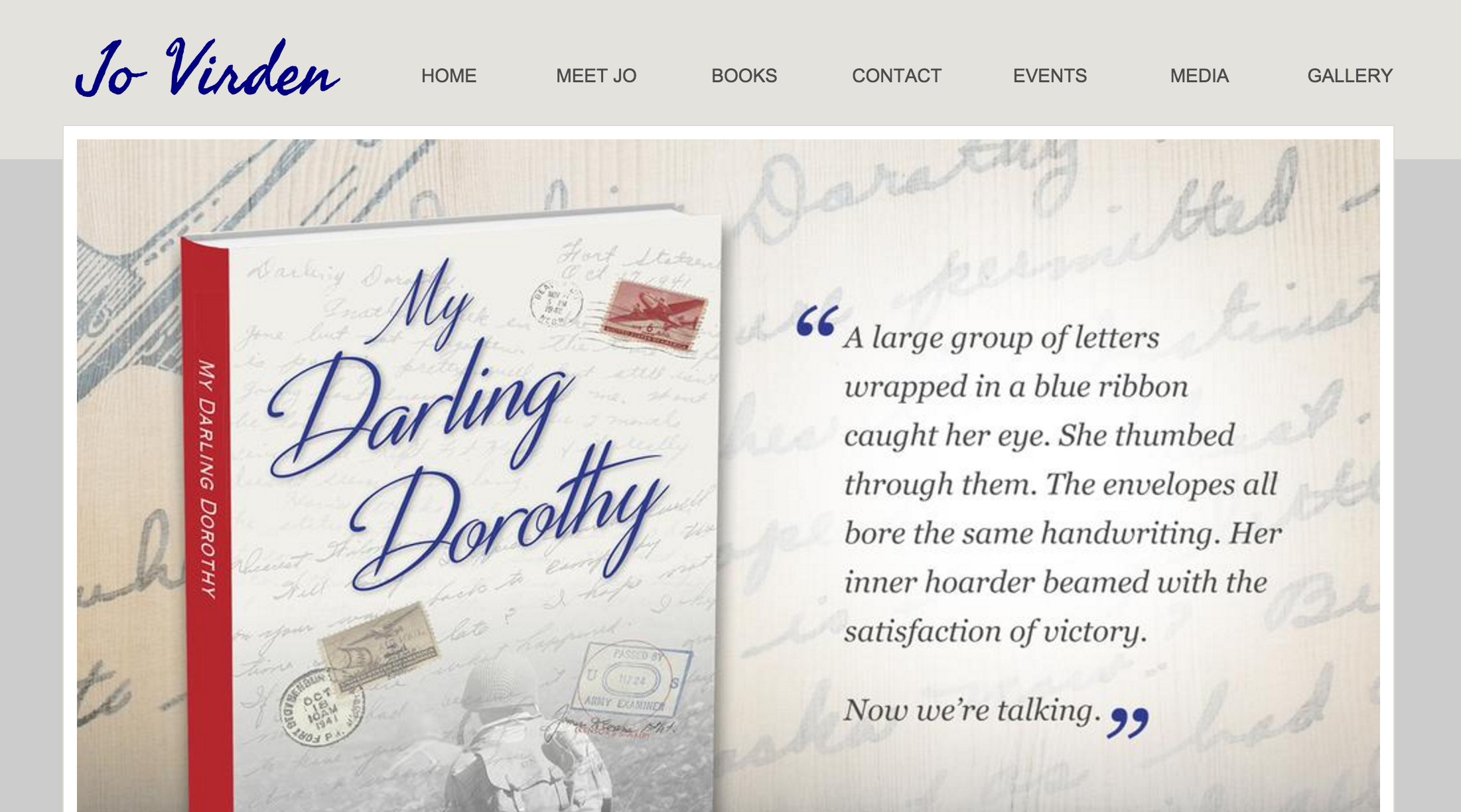 Jo Virden is the author of A Passion For Life: Ruth Marie Colville. Her first love is writing short stories. My Darling Dorothy, which began as a simple short story, evolved into her first novel.

Although Jo’s profession was nursing, she has been writing short stories since high school. She has written and published both a biography and a novel while, ironically, none of her short stories have yet been published. She says, “It’s funny how life works. If you stay open to possibilities all sorts of opportunities arise.” One of those opportunities has developed into a passion promoting childhood literacy. She spends many hours volunteering in reading programs throughout the Denver Metro area. “I don’t know where this will lead, but I know I am helping to create successful adults who will enjoy reading. You could also say I’m creating future audiences for my books! Everyone wins!”

Jo Ann lives in Arvada, Colorado with her husband, Bill and enjoys outdoor photography, long walks in the Rocky Mountains, and spending time with her family.